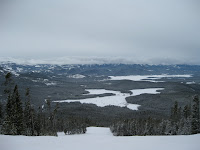 These days you don’t know whether to look for Santa Claus or the Easter Bunny.”
That remark pretty well sums up the whims of spring weather.

This past week, my buddy, Tom Tripp, and I made what we figured would be our last ski outing of the season. We’ve been skiing just about every week since mid-January at Discovery Basin, Butte’s closest alpine ski area. This has been an El Niño winter, which generally translates to a winter without a lot of snow or cold temperatures to hold the snow on the mountain. While this isn’t a good combination for skiing, or stream flows later this summer, looking back over the last couple months, we agreed that we have had a great ski season.

There haven’t been many big dumps of snow, but there have been a number of light snowfalls, and we’ve been there for most of them, it seems.

Still, those balmy spring days have been taking their toll on the slopes, especially south-facing hillsides that catch that intense afternoon sun. On our last outing, a couple runs we’d skied the week before were closed. On the other hand, we had excellent skiing on “backside” runs that don’t get much direct sunshine.

A couple days later, I put on shorts and sandals, hooked up a hose, and washed a winter’s worth of grime off the truck. Washed and polished, it looked a lot better than it did after the last couple ski outings.

As I finished the truck-washing project, clouds were moving in and the air took on a bit of chill. The next morning we had new snow on the ground, and snow squalls moved through the area all afternoon. That’s spring weather for you.

These next couple weeks, most of Montana’s ski areas will be closing for the season. As spring storms move across Montana, often bringing heavy snow to the mountains, dedicated skiers often express frustration about their favorite ski areas closing when there’s all that new snow. Yet as ski hill operators will tell you, those season closings are more about economics than snow. As we get into spring, our interests turn from winter sports to other things, such as fishing, tennis, golf, wild turkeys, or even yard work. There may be new snow in the mountains but there are other things going on, and playing in the snow just doesn’t seem that important anymore.

Of course, if you don’t depend on a chairlift to get you to the top of a mountain, the ski season doesn’t have to end anytime soon. For cross-country and backcountry skiers, the ski season never has to end, or at least not as long as you can hike to where the snow is. In fact, I have one friend who fondly recalls the year he and a buddy successfully made an effort to ski in every month of the year. It sometimes took a lot of hiking to get up high enough to find skiable snow. On the other hand, they also had a couple outings when a passing storm dropped heavy snow on the mountain peaks, rewarding their efforts with a major powder day.

While the weather is often confusing, each day there’s an increasing length of sunshine, and, of course, this coming Sunday will be Easter Sunday, which this year will be the same date for most Christian churches as well as Orthodox churches.
Another spring ritual some people observe is to plant sweet peas on Good Friday. When we lived in Iowa years ago, some people subscribed to planting potatoes on Good Friday. On the first day of spring, March 20, it was so nice out that I felt compelled to scratch in the dirt, and planted some spinach seeds.

That’ll be food for the Easter bunny by late May.