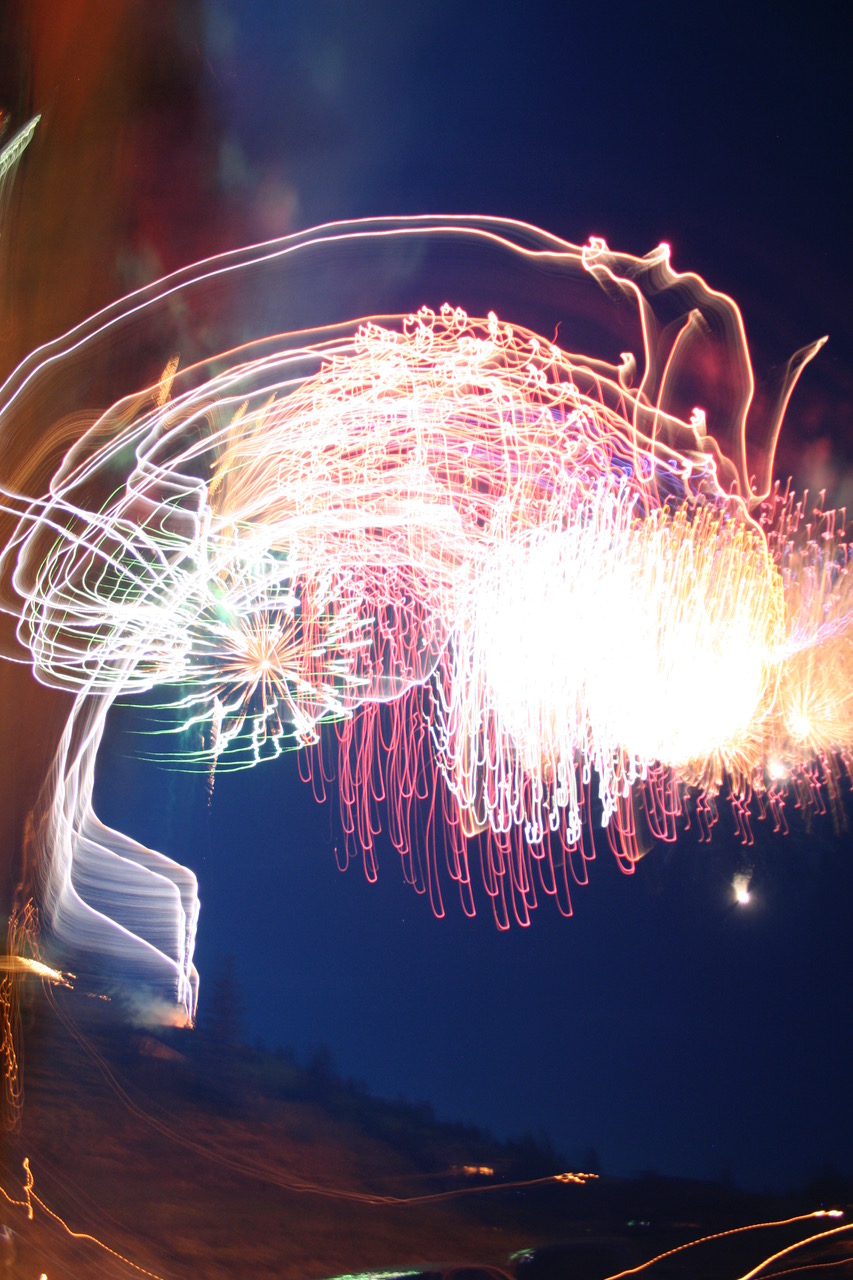 When photographing fireworks, it’s a good idea to use a tripod. Nevertheless, i kind of like this one.

Tomorrow we celebrate the 243rd birthday of our nation. It’s a day that our nation’s second president, John Adams, and one of the authors of the Declaration of Independence, wrote that, “ought to be commemorated as the day of deliverance by solemn acts of devotion.”

Adams also said the day should be “solemnized with pomp and parade, with shows, games sports, guns, bells, bonfires, and illuminations, from one end of this continent to the other, from this time forward forever more.”

The Declaration of Independence is (not just was) a revolutionary document that continues to ring the bell of liberty even after almost two and a half centuries.

Consider this statement of human rights. “All men are created equal. They are endowed by their Creator with certain inalienable rights, among these are Life, Liberty, and the pursuit of Happiness.”

To be sure, at the time that the Continental Congress adopted the Declaration, the Founding Fathers really hadn’t thought things through. By “all men” they meant only men, and white men at that; white men with property. Thomas Jefferson was among the many slaveholders in that august body. Jefferson wrote of slavery as a “moral depravity” and a “hideous blot.” He often wrote eloquently, advocating an abolition of slavery, though at the time of his death, exactly years 50 later, he had liberated just five slaves, not including his long-time mistress and mother of their five children, Sally Hemings. I’ll note that a Washington Post article in 2017 asserts Sally wasn’t a mistress. She was Jefferson’s slave and thus Jefferson was a rapist.

While the study of history leads to contradictions and confusion, the assertion that people are created equal, with inalienable rights, including life, liberty and the pursuit of happiness still rings on this Independence Day.

In recent weeks I’ve been thinking of my dad. He was one of the younger children in a big family and the dream to migrate to America was too powerful to ignore. To stay in Norway meant a life of poverty and his dream of owning a farm seemed impossible.

On April 30, 1917, at age 17, he passed through Ellis Island and pursued, for the rest of his life, the American dream. He worked hard at anything that paid money. He accumulated a nest egg to pay down on a farm and lost it all when his bank failed in the Depression. Nevertheless, he kept working, became a tenant farmer and finally a farm owner.

I’m not telling of Dad to demonstrate what a great man he was. Rather, his story is the immigrant’s story, typical of Irish, Italian, Mexican, Jewish and other peoples who came to the United States in search of a better life.  It wasn’t just economic opportunity, either. He grew up in possibly the richest part of Norway for fishing, a destination for people of wealth and privilege to fish for Atlantic salmon. Yet, the fishing rights were owned by the wealthy, “The King of England,” he’d say. Migrating to the United States was not just a chance to improve his economic status, but also the right to go fishing on public waters.

I can’t think of my dad showing up at Ellis Island and being welcomed to this nation without thinking of the mess we are having along our southern borders, where immigrants are coming to our borders in search of a better life. Instead of being welcomed, they are being thrown into detention centers, with children being separated from parents and warehoused in depravity, with government lawyers arguing that sleep, soap and diapers are not any kind of human right, not to mention a chance to go fishing.

As we approach another election year, consider Jefferson again. “Leave no authority existing not responsible to the people.”

I also refer to Jefferson’s thoughts on another freedom. “Our liberty depends on the freedom of the press, and that cannot be limited without being lost.”