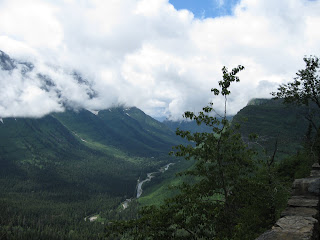 “He’s been to Glacier, but he still hasn’t seen it,” has been my wife’s standing joke about my first visit to Glacier National Park.

After 25 years, that joke is getting old.

We had a houseguest from the east coast over the 4th of July weekend, who suggested the trip to Glacier, so on July 4 we headed north.

It’s appropriate, this year, to visit America’s tenth national park and to celebrate its centennial. President William Howard Taft signed the law creating Glacier National Park on May 11, 1910. George Bird Grinnell, the editor of Forest & Stream magazine (predecessor to Field & Stream magazine) led a long campaign to make the area he dubbed, “The crown of the continent,” a national park.

On the other hand, the park became a major income generator for the Great Northern Railway. The company, through its Glacier National Park Company subsidiary, built hotels and chalets in the park to accommodate visitors. As the U.S. fell in love with the automobile, the park built the Going to the Sun Road, the only road that bisects the park, and since its completion in 1932, has been acclaimed as a great engineering achievement.

The Going to the Sun Road and the road’s summit at Logan Pass at 6646 feet has been at the center of my wife’s Glacier jokes. In that previous visit, when we were on an August vacation trip, storms swept across northern Montana.

We camped at Hungry Horse reservoir and drove to Browning to drive north to the St. Mary’s entrance. As we started gaining elevation we didn’t get far before clouds closed in. At Logan Pass there was about two feet of new snow on the ground and almost zero visibility until we were at the bottom of the mountain along the McDonald River. That trip, again, gave my wife joke material for 25 years.

So, would this trip be better? At an overnight stay at St. Mary’s, storm clouds gathered over the mountains and heavy rain fell during the night. As clouds moved on we saw a dusting of snow on top of the peaks. We also overheard other visitors, unprepared for mountain weather, muttering, “And this is supposed to be summer?

This time, however, the sun came out and while there were intermittent rain showers, we had bright sunshine for several short hikes to see waterfalls and scenic vistas. The lower elevations were full of wildflowers in full bloom.

Logan Pass, however, still keeps its secrets. Dense clouds hovered over the crest of Going to the Sun road with visibility barely more than a car’s length. At the Logan Pass visitor center, snowdrifts towered over the walkways—a strong indicator of the amount of work it takes to open the interior of the park every summer. Some visitors, however, took advantage of the snowfields, trekking up the walkways carrying skis for a July ski outing.

While there are still giant snowdrifts in early July, the other side of the story is that this centennial year is a good time to visit Glacier National Park, and to be able to catch glimpses of the few glaciers still surviving. In the mid-1800s, when the first white visitors came to the area, there were an estimated 150 active glaciers, a number that declined to about 100 when the park was formed. In this centennial year there are just 20 glaciers left and projections are that they will disappear in the next ten years.

Just remember, when you’re packing for a trip, don’t forget the polar fleece vests and windbreakers. Even though glaciers are melting, winter is never far away on the Crown of the Continent.